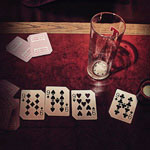 Rock C has been implemented as

whereas it should be

I have spoken about this issue a long, long time ago, although I did not articulate the problem similarly.

I do not have "highlight non-grid snapped notes" option switched on in EoF because I would be looking at cyan graphs almost permanently.

It's not the grid moving, it's the notes.  It comes because (I think, I am sure raynebc can correct me) of difficult maths i.e. sums that require rounding.

For example, you say that it never happens when you double the bpm.  Because doubling something is mathematically easy and does not require rounding multiple decimal places.

But when you go from 120 (the defaut number) to something like 145 then the multiplier is 1.20833333 which cause some of the notes to come off grid ever so slightly.

I think it happens as soon as you change BPM, it's just that EoF seems to not be highlighting it straight away.  There is possibly logic to why EoF takes a step or 3 before it realises notes are off grid and highlights them.

To reproduce what I mean

- Press Ctrl+A to highlight all notes

- Hit Ctrl+Shift+R to re-snap all notes

- Notes will now be highlighted cyan

The moral of the story is that when you change BPM (especially when you are actually changing individual beats to beat map the song) then notes come off grid.  It is good practice to selct all the notes and re-snap them again manually at regular intervals.

To re-cap, the commands that will solve your issue

- Ctrl+A to highlight all notes

Alas it was not FHP causing my problem.  The following project files will show that the arrangements I think are causing the problems do not contain FHPs.

Something about the included XMLs are crashing RS

I just don't know what.

I build the custom with bass and vocals and it works.  I include Rhythm or Lead and the custom plays the intro music, but as soon as you press "go" it fails and locks the game up.

Any help would be great

Not a bug or a feature request, just a thanks.

I am loving the new 1/96 grid snap, it has come in real handy in my recent JTC customs.

Now I have it, I dunno how I lived without it

Thanks whoever suggested it, and thanks for implementing it

Keep at it man, you'll get a big stiffy when you finally play something that you made

Go up, hits loads of repeated pre bends, then come down.  You can sustain the first bend and hold if you want.  You will probably have secondary questions when you try it.  Best to take some screenies, post them and ask.  I could be here all day with a million permutations, but the pic I showed you is how to begin.

Edit - I got ninja'd while I was messing messing with screenies

#230436 DD makes the chart inaccurate at some point

I edited this post in case you read it...  I now understand...

For easy double stop bends you need some Bend=0

For complex bends try this

Shortcut is Shift+N, saves soooooo much time if you are doing lots

As raynebc says it cannot be helped.  I've got a pretty decent rig that can zip through modern games, and I have to stop/start every so often.

Trust the visuals when syncing.  If you are making modern metal type music where the audio graph is basically a rectangle then using visuals can be difficult, but usually in most songs there are clear places on the audio graph where drums are hitting (usually snares), choruses are kicking in/ending, solos begin and lots of other visual cues.

Or, as raynebc also says, you will be hitting the space bar constantly anyway to drag beat markers about.  Then the audio/visuals will stay in relatively good sync.

I'm so used to it now I hardly notice (or simply don't worry), but I always rely more on where the beat markers are in relation to the audio graph rather than the actual audio.

You can get it here

I have to say man, this is one complicated song.  I've made 300 customs and this would make me scratch my head at how to get some of the techniques into the game.  Real mind boggling stuff.

I thought that the quick save function eliminates all warnings?

Can this not be used instead of eliminating other warnings or making matters more complex with extra settings?

Whereas I have come across songs where its impossible not to cross a boundary with sustain or a phrase boundary with an arpeggio, it does not happen that often tbh.  And the warning is a reminder to look out for possible glitches in game.  Trouble shooting why there's a gfx glitch or missing notes in your DD is far easier if EoF has been warning you that you crossed boundaries.  I don;t like crossing section boundaries at all, and most songs I have no intention of making DD.  But, someone else might and it reduces the chances of glitched charts and/or hanging customs (omg I'm so old - hanging customs is so 2014

I know it's user preference and most EoF users will probably not want all warnings all the time, I'm just fighting the case for what I see as very minor inconvenience that can actually be extremely helpful and a great time saver in the long run.

It's pretty bloomin hard to do cozy, tbh.

Maybe not for a seasoned C++ head, but certainly for a 12yo that's just picked up a guitar and starting to get enough confidence to challenge tabs/customs and maybe wanting to make their own.

Plus the search function is no Google now, is it

Is it possible to have a list (maybe 5) of recently loaded .eof files in the File menu?

People are so used to that now, with Office programs and what not.

Sorry to break up your little handshape party with a problem

Good luck on the dissertation Berneer

Oh no, thats Berneer busy for another month.  We ain't never gonna see this Blaze custom